Last Wednesday at 5:30 I showed up at Tikki Tatto to get my color, I wasn't sure if we'd be able to get it all done in one sitting. Apparently I'm tougher than most, I sat for 5 hours, with a couple of breaks, and I left the shop just after 11 p.m. I love Travis my tattoo guy, he does great work as you can see, and he's really a down to earth good guy.

I probably have about 3 days of healing left, it's still a little bit pealy. Steve called me "scabby" all day yesterday, as it wasn't pretty with all the chunks of colored skin falling off. And when I took my shower yesterday morning, and again last night the washcloth looked like it was covered in fun-fetti. Anyway, hope you enjoy my tattoo as much as I do. : ) 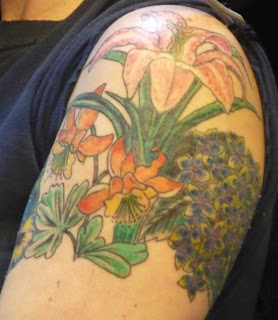 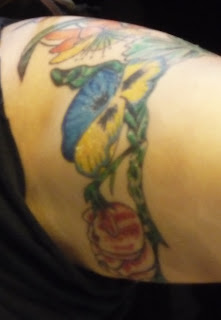 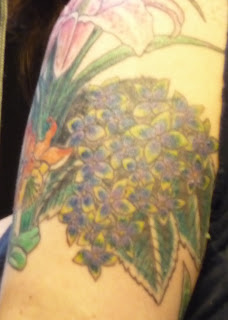 My 40th Bday is coming up in a few weeks, and I decided that since this is a milestone birthday I needed some fresh ink. Wednesday I went in to the tattoo shop and spent 2.5 hours in the chair. We're covering up an existing tattoo that I'm going to have re-drawn on the other side. I go in next Wednesday to get the color. I'm so excited. Please pardon the armpit stubble and the giant boob. 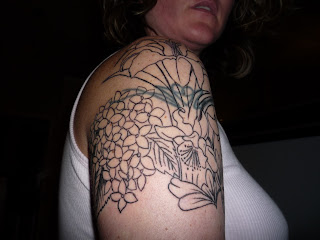 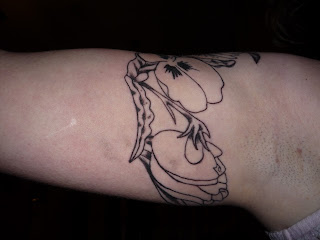 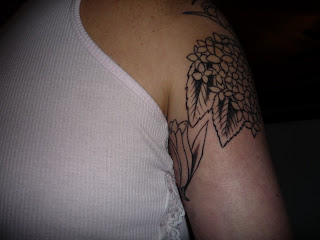 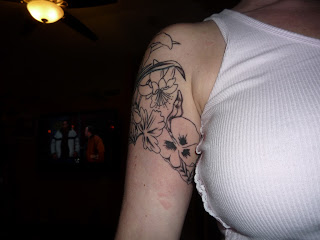 It's Been Raining N Stuff

It’s been raining, not the kind of rain that would cause me to get out the hammer and nails and constructing a poorly executed excuse for an ark. I’m not rallying the husband and the dogs to join me under the umbrella as we float off into Puget Sound. But it has been raining. As some of you may know, Father in law, (referred to as FIL from here on out) bought a “real nice motorhome” over the summer that has been the biggest pain in our asses since he signed his name on the dotted line.
FIL called Steve on Tuesday and said “my motorhome is leaking, I think it has some holes in the roof, can you come over after work and see what’s up there” (he seems to think that it never leaked before, because the lady he bought it from said it never leaked before)
Now a normal person would have gone to the store, picked up a tarp, and or some snow roof to ensure that said “real nice motorhome” would be leak free through the rainy Pacific Northwest winter.
Not FIL, FIL once hung a tarp inside the house with a string running from the corner into a bucket because he couldn’t get up on the roof, ingenious? Yes. Redneck? Definitely.
Steve called on his way home to see if it was raining at FIL’s, he said “No, I can’t see it, I’m in my chair” Again a normal person would either get up out of their chair, or get someone else in the house to look outside, but not FIL. If he can’t see outside, it must not be raining.
Raining, it was raining, and Steve the loving son that he is, drug out the ladder, climbed up on to “real nice motorhome” and spotted a couple of holes.
“Yeah, dad, there’s a couple of holes up here, grab me the silicone and I’ll fill them”
FIL  “awe hell, you don’t need silicone, just put some duct tape on it”
“But dad, it’s wet, it’s raining and the tape won’t stick if it’s wet”
FIL “just dry it off with this here towel”
About that time Sis comes home
“Hey Sis, get me the silicone, dad seems to think that duck tape is going to stick to the top of this wet roof, and bring me a towel” (sis does not like to be bossed around, and she was pretty annoyed that she had to be out in the rain and fetching things while Steve sat on the roof in the rain)
He filled the holes with silicone, that’ll hold it temporarily.
FILL called on Wednesday to see what Steve could do to help seal up the rest of the roof.
Steve told him to go buy a big tarp that will cover the whole motorhome, or better yet a “motorhome tarp” that is made to fit over the top, has a door zipper and is perfect for keeping things nice.
FIL is not about to spend any money, he has it, but would rather scrape together stuff around the house, and nothing ever works as planned.
This weekend, Steve gets to take a small tarp up on the roof of “real nice motorhome” and duck tape the tarp on so the rain won’t run in. We’ll see how long that lasts.

Update: As of 3:00 today FIL has purchased a tarp, as well as 100 feet of hillbilly rope to tie the tarp to the "real nice motorhome" Steve's stopping by there after work to tie the tarp down, I'll see him around 9:00 tonight.
Posted by Madge 9 comments: Links to this post

Madge
I was born a poor black child in the south. My mother was a hamster and my father smelled of elderberries. I have been married to the love of my life for 14 years, I'm in a great place, and life is good.

Link to my Banner and Button Site

Look Over Here These People are Cool Too